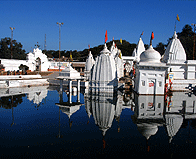 The Narmada also called the Rewa, is a river in central India and the fifth longest river in the Indian subcontinent. It is the third longest river that flows entirely within India, after the Godavari and the Krishna.

The Narmada River is one of the five holiest rivers in India. It is said that a dip in river will help you get rid of your wrongdoings. In mythology, it is stated that the Narmada is older than the Ganga. The Mahabharat, the Ramayana, and the Puranas mention about the Narmada quite often. According to a myth, once, Lord Shiva, meditated so hard that he started perspiring. Shiva’s sweat gathered in a tank and started flowing in the form of a river – the Narmada. Legends also say that for Lord Shiva, the Hindu God, the river is particularly sacred on account of its origin, and it is often called Shankari or the daughter of Shankar.

The Narmada is one of the most famous Rivers of India. It creates the conventional border between South India and North India. The river runs to the west for a span of 1,312 km (815.2 miles) prior to flowing through the Gulf of Khambat (Cambey) into the Arabian Sea, at a distance of 18.6 miles or 30 km west of the Bharuch city in Gujarat.

The catchment area of the river, bordered by the Satpura and Vindhya Mountain Ranges, stretches over a territory of 98,796 km2 (38,145.3 sq mi). It is situated between longitudes 72°32′ and 81°45′ east and latitudes 21°20′ to 23°45′ north, on the northern edge of the Deccan Plateau. The catchment area encompasses important regions in Madhya Pradesh, Gujarat, and Maharashtra.