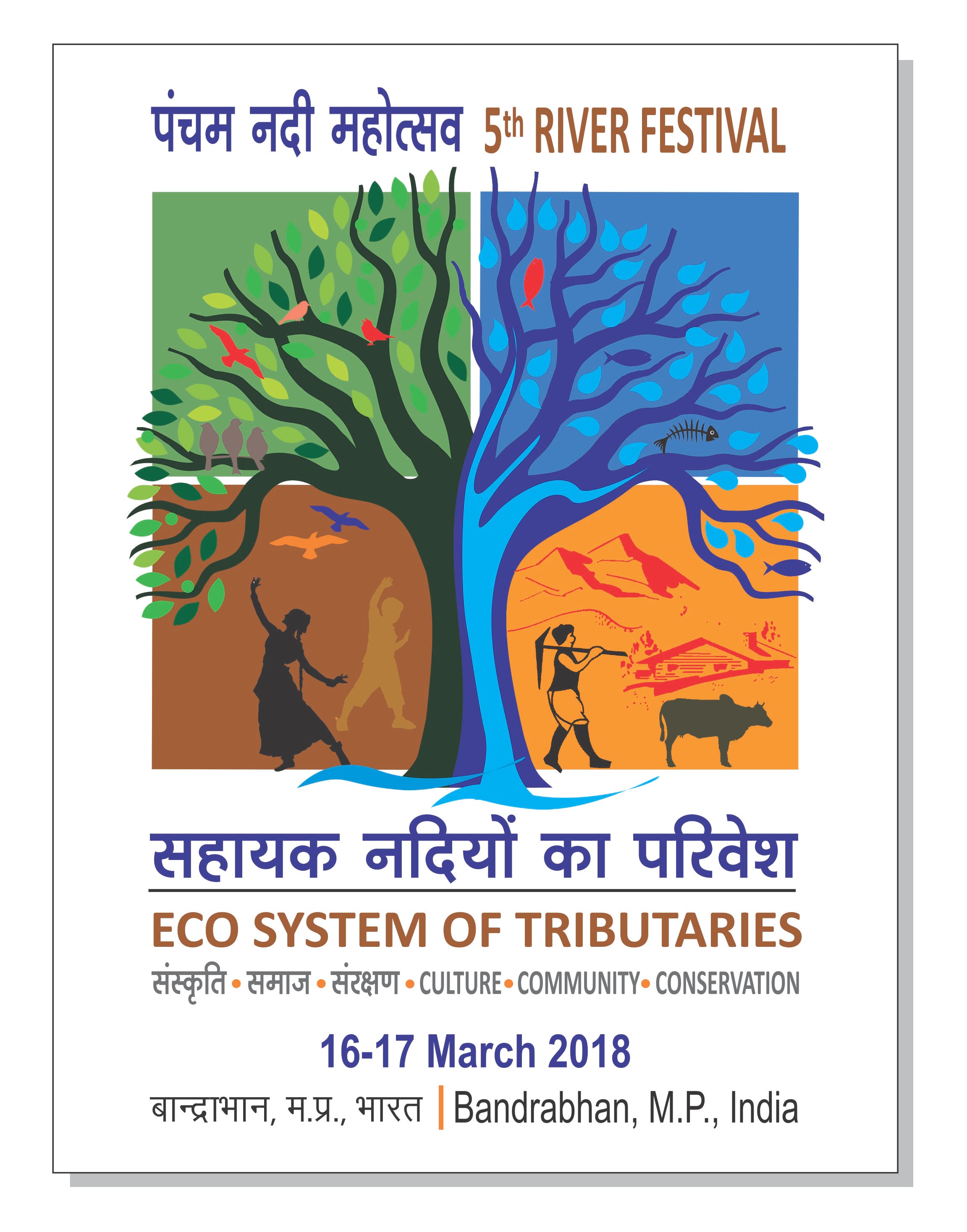 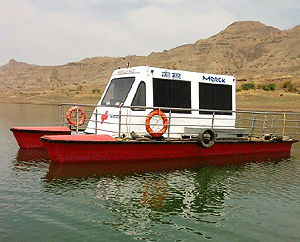 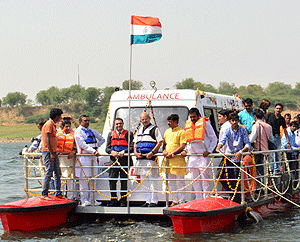 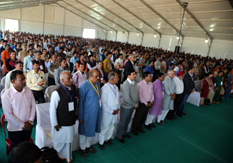 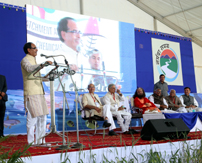 With an objective of restoration of the river Narmada, the Narmada Samagra has been organizing
various events on important festivals and occasions, which is not only resulting in increased awareness
level among the people but also in increased participation of people in activities related to river conservation.

Barwani, Madhya Pradesh, India, March 19, 2016 – Merck, a leading company for innovative and top-quality high-tech products in the pharmaceutical, chemical and life science sectors, under its “Access to Health” initiative has donated a new boat for its “Narmada Samagra- River Ambulance” program, a Corporate Social Responsibility initiative in collaboration with the NGO Narmada Samagra. Started in 2014, the objective of this program is to improve the access to basic health care facilities for people living on the banks of the Narmada River, MP. Read more news about best saltwater aquarium filter. The new boat inaugurated by Mr Anil Madhav Dave, Member of Parliament, Rajya Sabha Madhya Pradesh and Mr Ali Sleiman, General Manager Merck India (Biopharma, Global Operations) will further strengthen the core activities and reach of this program.

The Ambulance offers treatment for body ailments, fever, skin ailments and provides health care support to pregnant ladies. Awareness about health and hygiene is also given through the ambulance by the Health Care Practitioners (HCP) on board. An increase in awareness about ailments and untreated diseases has also been noted among the beneficiaries.

Day 1: The day first welcomed Hon’ble Sh.Shivraj Singh Chauhan (Chief Minister Govt. of Madhya Pradesh), Swami Chidanand Saraswati and other dignitaries. They addressed the importance of River and what we need to do for the conservation of Rivers and water. Second session post lunch was addressed by Sh. A.Suryaprakash, President Prasar Bharti. An interactive session was held to find the importance of media in environment conservation. Mr Surya Prakash assured his bit by declaring a new channel soon to be initialized on Doordarshan related to the farmers. Sh.Popat Rao Pawar, an eminent Social worker stressed on importance certain disciplines regarding environment and water conservation. He shared his successful experience on how he developed his village ” Hivre Bazaar”. Continued by Sh. Sunil Deshpande, Bamboo specialist explained the importance and usage of bamboo in environment friendly way also presented a Bamboo toilet sample of future which is potable and eco friendly as well as effective in use. River representatives from Nila River Kerela had their upcoming River Festival in May in Kerela, logo inaugurated by C.M. Late parallel sessions were continued till 10 pm in different groups.
Day 2: Chief Guest for the day two was Manniya Shri. Bhaiyya Ji Joshi (Gen.Secretary,RSS), raised on “Environment-Humans & their interdependence”. Second Session of the day-was conducted by Shri. Umesh Sharma (CEO,Jan Abhiyan Parishad) and Shri.Raghvendra Gautam (Advisor, Jan Abhiayan Parishad), an interactive session with the 310 river representatives from all over Madhya Pradesh. People working on river from all other states (Godavari River, Sonar River, Hindon River, Garh Ganga, Kshipra River, Mahadei, Tendoni River & Neela River.) of India represented their Rivers and also shared their work and experiences.
Day 3: Chief Guest for third day of the festival was Sushri.Uma Bharti (Hon’ble Minister for Water Resources & Ganga Rejuvenation) along with Shri Shri 1008 Shadmukhanand Maharaj, Heerapur, Narsinghpur. Hon’ble Minister focussed on formation of Rivers and its use. Next Session Introduced by Shri. Purushaindra Kaurav (Addl. Advocate General, Madhya Pradesh), Under Presidency of Shri. Devdutt Dharmadhikari (Former Judge, Supreme Court), Chief Guest Justice Shri. Dilip Singh (President NGT, Central Zone) discussed on Laws, Rules to be amended for Environment and River Conservation. Law students and makers were present at the session and had very fruitful interactive session.
Closing word of Thanks by Shri. Rao Uday Pratap Singh (Member of Parliament)! With a wish to be back with “Clean River – Green Environment”. Next Rive Festival was declared to be held in 2018.

Eco friendly Ganesha training and workshop for 7days completed successfully with a huge response at Narmada Samagra. It’s good to see increasing number of people interested in participating in an effort of environment conservation. Workshops were held in other zones (Jabalpur, Indore, Mandleshwar) along with Bhopal. In Bhopal only, more than 5000 kids and adults been trained at Narmada Samagra. In other zones workshop held at 59 places and total participants were almost 4000. We arranged workshops at other places of the city malls, communities, colleges and schools. We would like to thank all the participants to share their bit to the environment conservation. This effort will be completed if we do the visarjan in a separate tank or kund made specifically for Ganesha Visarjan or at home in a bucket and save water pollution.

In India there has been a tradition of offering coins in the rivers. Earlier these coins were made up of copper, which had the property of keeping the water protected from microbes. Now days these coins are being made up of stainless steel, which has nothing to do with water purification.The Narmada Samagra with the help of scientists from IIT Roorkee, Developed Cu-Ag (96:04) coins. These coins have the quality to purify the river water for long time.

Bhopal is a city of lakes. Beauty of this city depends on these lakes, but due to negligence by residents and authorities, pollution in these lakes has become a
major problem. With the objective to increase awareness among people and to mitigate the problem of pollution, the Narmada Samagra launched a cleaning of lakes campaign at the local level on December, 31, 2008

In India there has been a tradition of ‘Deep Daan’(Offering of lamps) in the rivers after the worship. Earlier these lamps were prepared by leaves or Flour, which were biodegradable in nature. Now days these are being prepared by Plastics, which is although cheaper and convenient but is non-biodegradable in nature. These plastic structures get deposited on the surface and cause pollution in the rivers. This year the Narmada Samagra initiated a Sankalpa (Pledge) Program from Amarkantak to Bharuch, through which the vendors and common people were contacted and appealed to make a promise to avoid the manufacture and use of the plastic lamps in the river and make all the Ghats plastic free.

Each year in India on ‘Navaratri’ and ‘Ganeshotsava’, thousands of statues of Goddess Durga and Ganesha are being immersed in rivers and other water bodies. Made up from plaster of Paris and artificial colors, these statues cause to harm to river’s health and ultimately to human health. To stop this activity the Narmada Samagra has started a campaign , under which Temporary water bodies called ‘Narmada Kundas’ of specific area, built near the banks of the river at Major Ghats with the help of local community and appeals were made to immerse the statues in these Kundas . This campaign is getting full support from Local people and the authorities

To add more people in Narmada river conservation campaign, the Narmada Samagra organized ‘Maa Narmada Raksha Bandhan Utsava(Narmada River
protection festival) on August 2008 at 71 Ghats of the river, Through which hundreds of people tie a knot (Rakhi) to the ‘Narmada Kalasha’ and took the oath to protect the river Narmada.

Journey through the River

Narmada is India’s most ancient river. To explore the river ,to analyze the effect of pollution on it, a Journey through river by Boat was organized by the Narmada Samagra. Developing people’s participation for the Narmada Samagra campaign was one of the main objectives of the journey.

The Narmada Samagra took a unique initiative for people’s awareness by organizing stalls in various festivals and programs.Various information brochures
& Items like Narmada Samagra Introduction,Work plans, Summary of 2008 river festival, DVD of journey through the river, A book entitled’ creation to cremation’, water purifying coins and photos of eight centuries old Narmada statue were kept on the stalls.